ATLANTA – Atlanta Fire Rescue Department will visit Clay Street (NE & SE) in the Kirkwood Community, which has over 80 homes, to check and replace smoke and carbon monoxide detectors.
Residents are encouraged to call the Atlanta Smoke Alarm Recall Hotline if they suspect they may have a smoke alarm affected by the recall. Any resident in need of a smoke alarm may also call 404.546.2733 or send an email tosmokealarm@atlantaga.gov to schedule an inspection and replacement at no cost.
To date over 370 residents have contacted the Smoke Alarm Recall Hotline since established, and 1,829 smoke alarms have been distributed.
WHO: Atlanta Fire Rescue Department
WHAT: City of Atlanta Firefighters continue the mission of the ASAP by providing residents of Atlanta with a working smoke detector.
WHEN: Saturday, March 31, 2012, beginning with a 9:30 a.m. briefing at AFRD Fire Station 18, located at 2007 Oakview Road SE, Atlanta Georgia 30317
WHERE: Clay Street NE & SE Atlanta, Georgia 30318
10th Annual Swing Into Spring Youth Tennis Camp 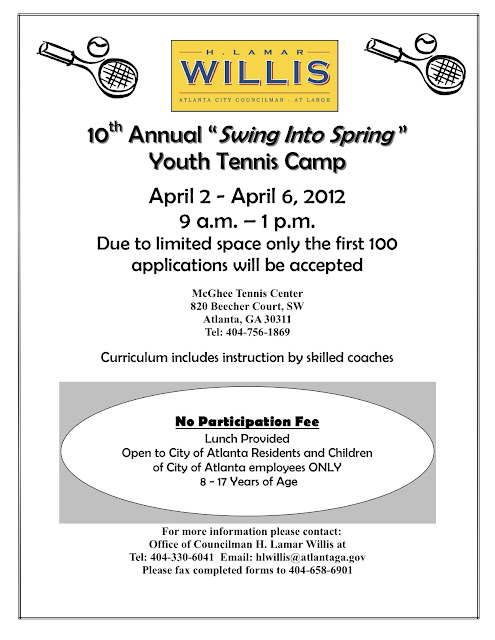 Download the permission form here!
2012 Ambassador Essay Contest for Atlanta Teens
The essay contest encourages the future leaders of the community to reflect on the role of key elected officials and municipal activities.  Winners will represent the City of Atlanta, Atlanta Public Schools and their communities at trainings and conferences including the 2012 National Service Learning Conference in Minneapolis, Minnesota.
Email hlwillis@atlantaga.gov to request an electronic copy of the application and contest details. 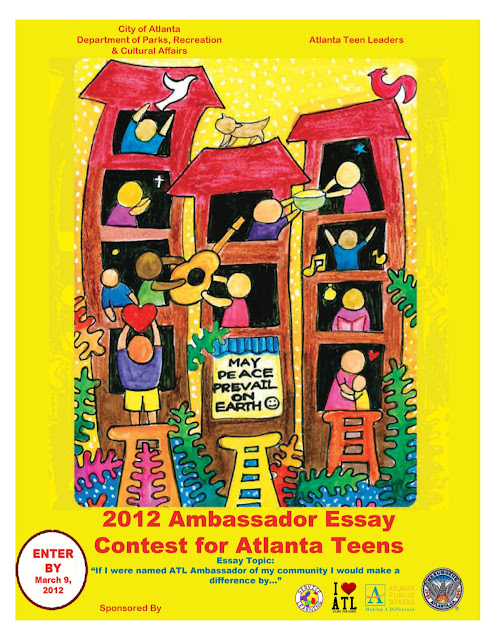 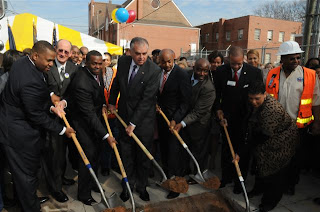 On February 1, 2012 I had the opportunity to participate in the construction launch with Atlanta Mayor Kasim Reed, Transportation Secretary Ray LaHood and several of my colleagues on the Atlanta City Council.  This exciting initiative will be a great asset to the citizens of Atlanta.  Please see the information below to bring you up to speed on the facts about this program.


My staff and I had a wonderful time hosting the Post 3 Annual Holiday Party.  Each year I select a group that has gone above and beyond to make Atlanta a great place to live.  In the past I have recognized public safety employees, senior citizens, and City Council staffers.  This year the holiday celebration focused on Atlanta Public Schools students and their parents, for overcoming the obstacles of 2011.  Enjoy the few photos that are posted on the page.  The full album can be viewed on my Facebook page. 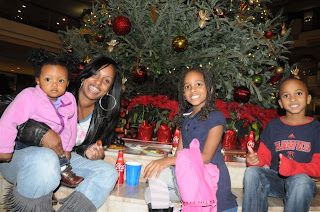 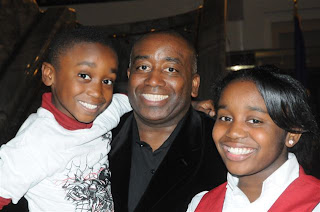 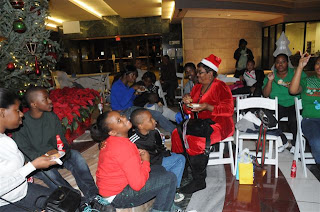 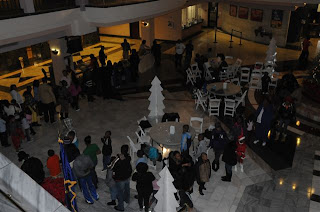 Highlights from the Atlanta City Council meeting for Monday, December 05, 2011

Highlights from the Atlanta City Council meeting for Monday, December 05, 2011

· A communication by Mayor Kasim Reed appointing Ms. Jo Ann J. Macrina, PE, to serve as Commissioner of the Department of Watershed Management for the City of Atlanta. This appointment is effective upon Council confirmation. Legislative Reference No. 11-C-0668

· A resolution by Councilmembers Kwanza Hall, Natalyn M. Archibong and C. T. Martin as substituted and amended by City Utilities Committee requesting that the City of Atlanta increase the funding allocation for People TV for the operation of public access; and requesting that People TV present a Strategic Plan to City Council. Legislative Reference No. 11-R-1510

· An ordinance by Councilmembers Kwanza Hall, Natalyn M. Archibong and C. T. Martin as substituted and amended by Finance/Executive Committee authorizing the Chief Financial Officer to amend the FY 2012 Budget by transferring Appropriations in the total amount of $180,000 from Non Departmental Budget for Public Access Operations and Support; to authorize the Mayor to enter into a new agreement with a public access provider when the current agreement with People TV, Inc. terminates. Legislative Reference No. 11-O-1511

· A substitute ordinance as amended by Finance/Executive Committee authorizing the Mayor, on behalf of the City of Atlanta, to participate with the Buckhead Community Improvement District and Liveable Buckhead by providing an amount not to exceed $200,000 for the performance of certain design and planning work for the Georgia 400 Trail. Legislative Reference No. 11-O-1656

A complete list of items on the City Council’s agenda can be viewed in their entirety on the Web at: http://citycouncil.atlantaga.gov/2011/fca1205.htm

All adopted legislative items and any amendments to those items or substitute papers can be viewed at: http://citycouncil.atlantaga.gov/Captions/default.asp

City Council minutes can be viewed at: http://citycouncil.atlantaga.gov/Minutes2.htm

Archived video of Atlanta City Council meetings can be viewed at: http://citycouncil.atlantaga.gov/Video.htm

###
The deadline to submit a nomination for Atlanta Intown's "20 Under 20" has been extended to November 15, 2011!  If you know a young person that has demonstrated a commitment to excellence please follow the nomination procedures. 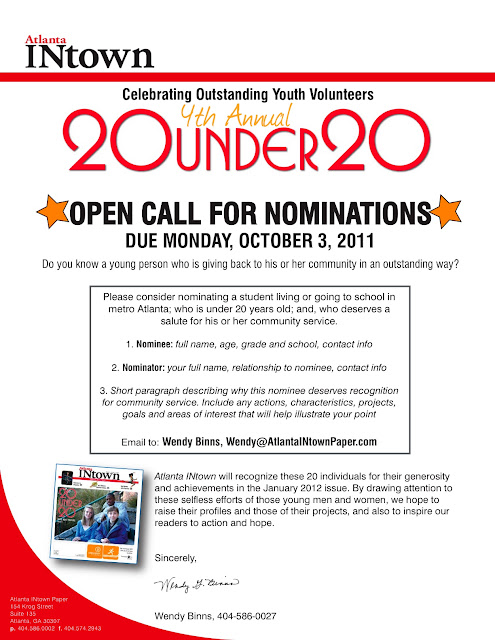 By Jeremiah McWilliams
The Atlanta Journal-Constitution


The community development and human resources committee of Atlanta's City Council has scheduled a public hearing to consider amendments to the city's housing code. The changes would require the registration of certain vacant property and the payment of annual registration or renewal fees. The public hearing will be held at 12:30 on Tuesday, Nov. 15 in committee room 2. City Hall is located at 55 Trinity Avenue SW.
Atlanta City Councilman H. Lamar Willis to host 3rd Annual
Southwest Atlanta Fall Festival

Saturday, October 22, 2011 from 12 PM-4PM
Atlanta City Councilman H. Lamar Willis invites you and your family to join him for the 3rd Annual Southwest Atlanta Fall Festival on Saturday, October 22, 2011 from 12 until 4 p.m. The festival will be held at the Zion Hill Baptist church lot, located at 815 Lynhurst Drive (across from Jean Childs Young Middle School).
The festival will feature FREE games, prizes and entertainment for children of all ages.  A new addition for this year’s festival is a dunking booth that will allow both children and adults to compete to raise funds for their respective schools by making a donation at the “Dunk Tank” and “Money Chamber.”
“Each year, I strive to make this event special for each child that participates.  I want the children of Atlanta to know that the City encourages and supports them” said Councilman Willis.
For more information about the 3rd Annual Southwest Atlanta Fall Festival contact 404-330-6041.
Atlanta City Council schedules Public Hearings on Council Redistricting


ATLANTA – The Atlanta City Council will hold two public hearings to afford citizens an opportunity to have their voices heard in the City of Atlanta 2011 Council Redistricting process.
The public hearings will be held at 6 p.m. in the Council Chamber, Atlanta City Hall (Second Floor), 55 Trinity Avenue, S.W. on the following dates:
· Thursday, October 20, 2011
· Thursday November 17, 2011


Every 10 years, based on U.S. Census results, the City of Atlanta and cities across America re-draw representative district boundary lines to preserve the constitutional right of one person/ one vote of its citizens. Based on the 2010 Census results the Atlanta City Council is seeking to maintain a balance of populations by creating 12 Council districts of 35,000 persons each (+ - 5%).
To achieve this goal, the Atlanta City Council will create and review a variety of maps and will ultimately select a single map which will ensure that Atlanta’s citizens have fair and balanced representation. This map will be presented as a part of City Charter amending legislation that will outline the new district boundaries.

The Liberty Mutual Fire Safety Pledge program is your chance to give back to the brave men and women of the Atlanta Fire Rescue Department who tirelessly work to protect your community. Each fall, ten $10,000 awards are given to fire departments where community members demonstrate their commitment to fire safety.

Remember-the Fire Safety Pledge Quiz is only open through October 31st, so please take the quiz today to give AFRD some points!! Spread the word and forward this link to your family and friends!!!
http://www.befiresmart.com/protect-your-community/fire-safety-pledge/default.aspx
"Thor" to be shown at West Manor Park Saturday Night

Atlanta City Council member H. Lamar Willis has teamed up with the Department of Parks, Recreation and Cultural Affairs for Movies in the Park on Saturday at West Manor Park, 3240 W. Manor Circle. The community is invited to bring folding chairs, blankets and snacks to watch "Thor." The movie starts at 8:00 p.m. All park rules apply. "Movies in the Park is a great way for families to come together and share a fun, free event that takes advantage of the great weather that we get in Atlanta early in the fall," Willis said.
Councilman H. Lamar Willis to participate in Project Interchange trip to Israel

During the trip, scheduled for September 18-26, PI seminars will incorporate the topics of immigrations and integration into Israeli society, human and civil rights, and the art of bridging cultures within a politically and ethnically diverse society. Participants will meet with both Jewish and Arab Israelis, as well as Palestinians for the presentation of differing viewpoints on informative and controversial issues.

“It is an honor to participate in the PI trip to Israel. I expect to share my perspective on policy making and what has worked well for the City of Atlanta at the seminars and meetings with various Israeli officials,” stated Willis.

Councilman Willis plans to keep citizens up to date on the activities of his visit using social media. For information and photos of the trip’s activities visit hlwillis.blogspot.com or follow HLWillisPost3 on Twitter.

About the American Jewish Council

The AJC's mission is to safeguard the welfare and security of Jewish people worldwide by defending and promoting pluralism as the best defense against anti-Semitism and other forms of ignorance bigotry and hatred.

Project Interchange, an educational institute of the AJC, brings opinion leaders and policy makers to Israel for a week of intensive travel and learning. Participants experience Israeli society, connect with their Israeli counterparts and learn about Israel’s extensive contributions in their fields.

Founded in 1982, Project Interchange maintains an alumni network of over 5,000 influential voices spanning more than 60 countries.